What does utopia mean to you?

Is it important to you to keep the idea of utopia in mind, the goal of a utopian world in mind while you do your work? How can you, or do you, apply the idea of utopia to your work? Absolutely. For me, I couldn’t even find the energy or motivation to create if I didn’t have some sort of utopia—conscious or unconscious—to keep me grounded. Otherwise, reality would drain me into resignation. There was a time I actually considered that my way of imagining an alternative was romantic and frivolous, because it wasn’t really based on the current reality. I thought that maybe I was doing injustice to it all. But I realized that I had been trying to answer the question: what should the future look like? An imagined yet wholly possible future is what drives me. In some ways, the imagined future is based on the past, heavily rooted in the ancestral knowledge of generations past here in Palestine. We had a strong and rich history of crafts like hand-weaving fabrics, wool-spinning, and natural dyeing—all of which signified our collective understanding and reverence of the earth. That indigenous knowledge is actually a critical element of the imagined utopian future we can build if we center that knowledge in our current conversations around climate change and social justice. In my own small world, I apply the idea of utopia by building intimate connections with the people (weavers and embroiderers) who are vessels of this knowledge. I learn from them, collaborating to create something truly beautiful and alternative to the mainstream ideas of creativity and work.

Palestinians are masters in finding and creating pleasure and life in the face of oppression. On every single Friday in the Spring season, you will find countless families and groups on blankets and chairs all throughout the hills and valleys. They are playing music, sharing food, and enjoying the land in spite of the fact that it is sliced up, that in the distance an illegal settlement is glowering down at them. On a drive through the countryside you can see farmers using rusty bed springs as fences to demarcate their fields and grenades to grow smaller crops. If a part of utopia means imagining a world in which we reuse things intended for harm to create life, then Palestinians are a model for it.

What does Utopia post-occupation mean for Palestinians?

Imagining what the future should like in Palestine is a political act. Imagining a post-occupation world is in and of itself actively refusing the occupier’s attempts to manipulate and subjugate us within the current limitations they’ve built. Entertaining the idea of utopia reaches beyond and punctures these oppressive structures. That’s why a raised flag or a politically-themed song or even a poem are means for arrest—they undermine a system that is far more fragile than it wants to admit and end up illustrating how much of a threat a mere idea—imagination—is.

Why is archiving Palestine on film important?

Archiving Palestine through photography is as integral as breathing air to me because of how rapidly the natural, urban, and cultural landscapes are shifting and warping. Sometimes I catch myself staring at a newly built skyscraper and willing my mind to remember what used to be there before it, how the land looked before it was swallowed in concrete—and I can’t and it breaks my heart. I stare at green hilltops as I make my way to my village up north, willing my brain to recall the hills before illegal Israeli settlements tore into the stolen land and built their cookie-cutter houses. Change is inevitable but here in Palestine it is change under the weight of both capitalism and military occupation and apartheid. If I don’t photograph it, I couldn’t look back to remember what once was—and what could be once again. Photographing Palestine aids in designing the blueprints for an applied utopia.

How does reclamation of native lands support the concept of utopia? Can utopia exist without it?

Utopia cannot exist without the reclamation of land and rights for Palestinians. In fact, it is the backbone of the utopia we are all working towards and fighting for. When so much of our identity is inextricably intertwined with land, through rituals around land, agriculture, food, song, textiles, art, etc. Like indigenous peoples, our collective identity was partially and fundamentally formed around the land. And the means for our oppression are done in an attempt to specifically target and dismantle that—through land confiscation, through the burning of olive groves, commercial monoculture farming, through the carving and diseverence of the land by the aparthied wall, illegal settlements, and military checkpoints—and so much more. In our utopia the land would be freed from these oppressive structures and restored to its rightful guardians and caretakers, the Palestinian people. 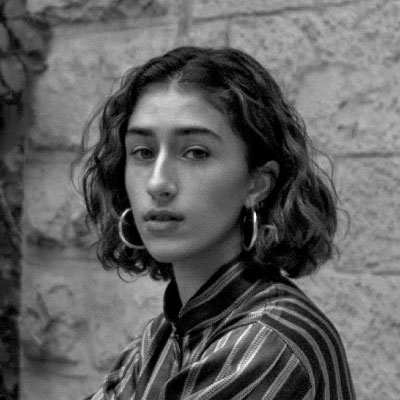 Yasmeen Mjalli a creative who found herself in the diaspora and moved back to Palestine where she is now based. She is the creative director of Nöl Collective, an intersectional feminist and political fashion collective which designs and produces apparel in Palestine as well as provides a space for local women-run cooperatives and brands to feature their work. Nöl strives to highlight the intersections of feminism, Palestinian culture, ethical fashion, and social justice within a larger political and historical framework–all through the lens of fashion. She graduated from UNCG with a degree in art history and studied at Duke University where she explored the intersections of feminism, Occupation, and displacement.