Weaving our Future: An Interview with Diné Weaver, Tyrell Descheny

Caring for 460 heads of sheep is what life was like for Tyrell Descheny and his family before the government started limiting how much livestock families could have. Now, Tyrell’s family has close to 50 sheep and that number continues to drop as the price of food and water steadily rise and livestock laws continue to change. Like many who grew up on the reservation, we spent most of our time with our elders, and for Tyrell, it was his grandmother in particular.

Tyrell’s first job was shearing his family’s sheep and also where he discovered how much wool was being wasted and how little wool was still being produced in traditional Navajo ways.

Tyrell mentioned he gave up several of his paychecks to buy the tools needed to turn wool into yarn, specifically colored yarn, to begin making his very own rugs.

Eventually, Tyrell saved up enough for all the tools and taught himself how to make yarn. His research consisted of oral history and traditions, as none of the information he needed could be found on the internet. Though Tyrell was able to connect with elders and find the plants needed to produce specific colors, he notes that it’s been harder to extract certain colors due to the ongoing drought in the Navajo Nation which contributes to the loss of the plants needed for these colors. This is just one way global warming and climate change affect our culture, history, and future.

Tyrell mentions that he is no expert in the dying process and though it’s a lifelong journey, it’s essentially as simple as getting the same color as whatever plant or clay you choose.The process after shearing includes separating the good wool from the bad and hand washing the wool with dish soap and water, but there is a traditional method that uses Yucca root that Tyrell would like to learn one day as well. Once cleaned and dried, he rubs the wool between two sharp paddles, a process called carding, that combines the hairs and spins it on a spindle, transforming the wool from fluffy and fuzzy to the smoothly bounded yarn we’re familiar with today. All in all, it’s a year’s preparation between starting a rug, getting the right plants, waiting for the sheep to be ready to shed, spindling it into wool, and finally dying the wool until all that’s left is the pile of wool. Once you have a loom, you can start working on the rug.

Traditional Navajo rugs have a family design, so back in the day, people could identify where the rug came from and who it was made by. It’s important to emphasize that Tyrell is self-taught, and as a male, weaving is typically looked down upon in today’s modern world of toxic masculinity, homophobia, transphobia, racism, and so on.

These oppressive systems are still very much alive in many Indigenous communities due to colonization and the current systems that we are all operating under. His path is all the more unique, given the many obstacles he faced.

Tyrell recalls a time in his life when he and his grandma visited a medicine man, and they asked her what her reason for weaving was. She replied,

As someone who also grew up with a grandma who was a weaver who had to take care of a large family, it wasn’t hard for me to understand. People think you need a particular reason to pursue a calling but feeding your family will always be worthy and essential enough. Tyrell explains that there are folks who weave for profit and folks who genuinely love weaving, and that there is nothing wrong with either, but there is a difference. Those who really know the history of the designs and the colors hold more knowledge and are typically less flashy when it comes to designs, but those who want to make money tend to go all out (as they should). As for Tyrell, he’s also decided that weaving isn’t just a hobby for him; it’s something he wants to practice and perfect for the rest of his life. 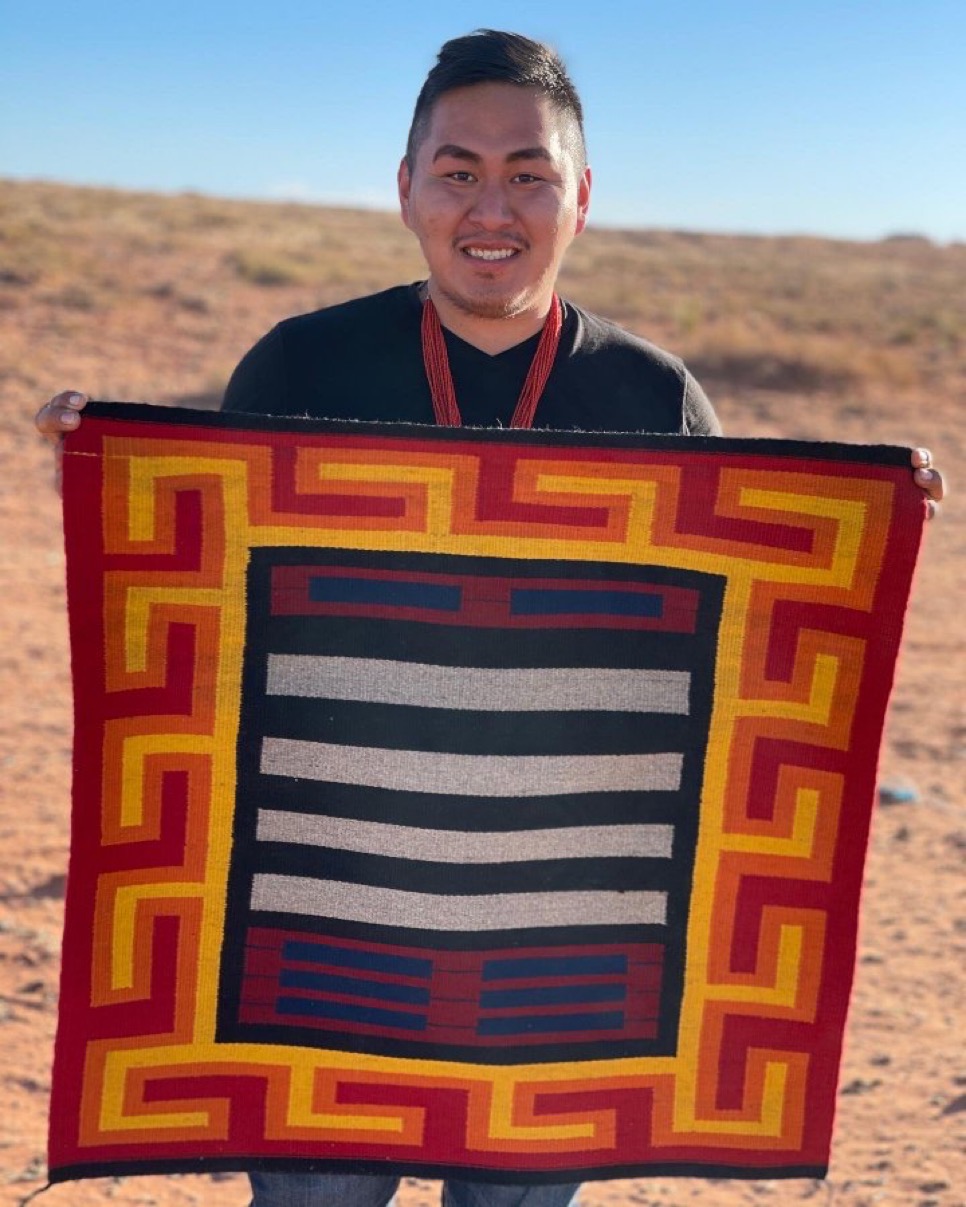 Tyrell smiling holding up one of his fully done rugs in the middle of the desert, courtesy of Tyrell’s twitter @navajotywoolboy

Tyrell weaves year-round, whether store-bought or hand-spun wool. He also weaves at night which is strongly against tradition, but times have changed— especially since we now have electricity and access to hand-spun wool that’s being sold on Instagram. Tyrell doesn’t see any issues with this, and nor do I. If we want to survive, we must adapt, and this is one way the future of Navajo rug weaving is adapting.

I asked Tyrell about the care of the rug, and he said,

If you really want to preserve it, only bring it out every few years. There is really no way to prevent wear and tear. Just like us humans— it’s the natural process of aging.”

He also recommends not to fold the rugs, but to roll them up and store them in a safe, cool area instead. Tyrell explains that sunlight especially can make the threads age quicker and that no matter what, even if you hide it away, the colors will age as you age, and it won’t look the same as when you first got it in 30-50 years.

I began to ask Tyrell about the process of selling his rugs, and he says he has never sold to a store due to the way stores robbed his grandmother in the past. “They would buy it for a couple hundred and turn it around and sell it for thousands,” says Tyrell. By speaking to other weavers, he learned that the best way to sell is by working with customers one-on-one. That way, it is a more personal, meaningful process. 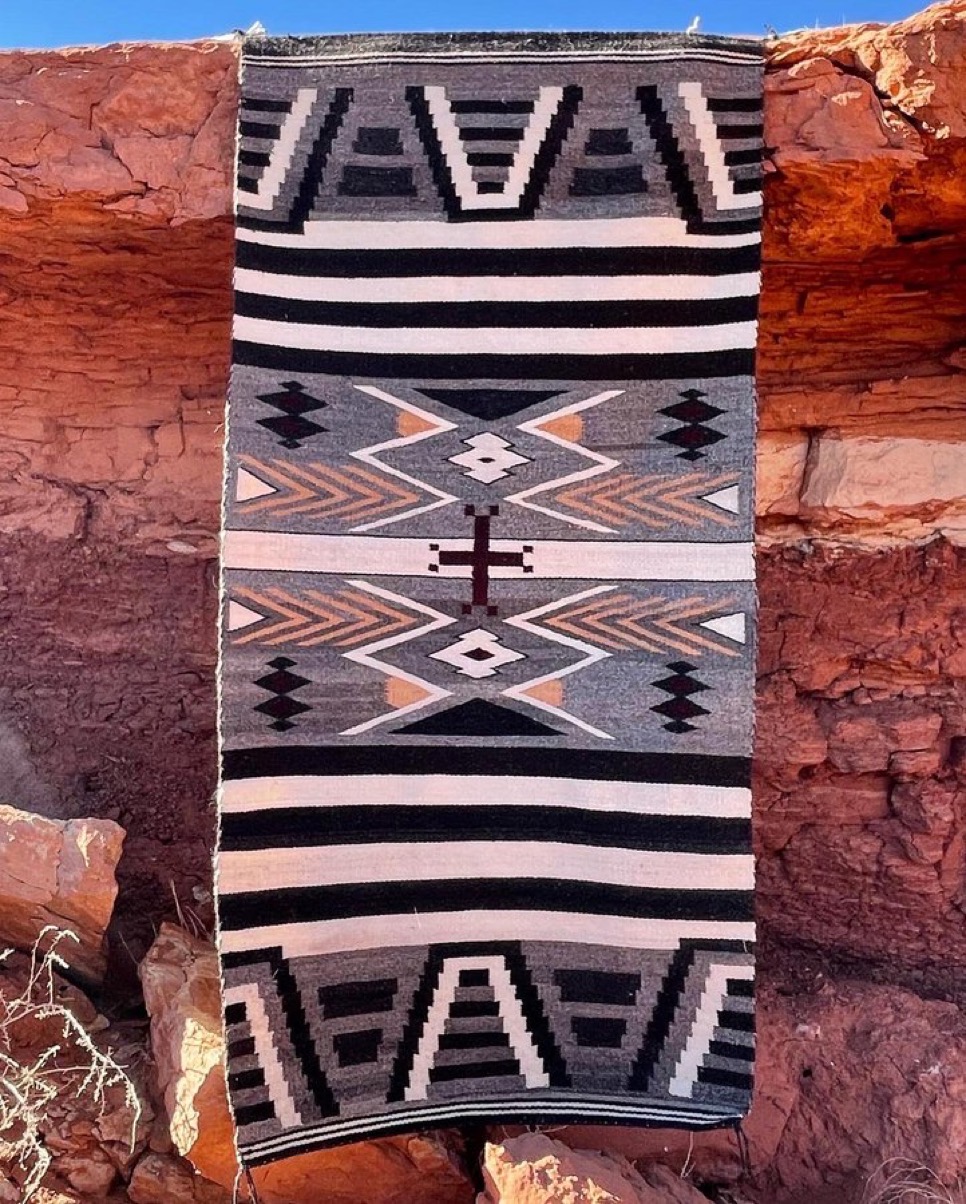 Tyrell’s rugs hanging down from the side of a large flat rock showing off his designs; courtesy of Tyrell’s twitter @navajotywoolboy

Tyrell also offers payment plans on his rugs and finds that most Navajo Women, his primary clientele, are happy with his prices and plans, which helps make his art accessible while ensuring he is still being paid fairly. Tyrell mentions that his clients also come from Belgium, Switzerland, and many other countries around the world. Tyrell is now booked out a year in advance with rug orders and currently has a waiting list of nearly two years, but for many, especially Native Women, it’s worth it.

Tyrell also started hosting Zoom classes because he is familiar with the feeling of wanting to do something but not knowing how, though he is currently on a break. Between going viral on TikTok, weaving rugs, and making wool, Tyrell is unsure of when he will start up classes again after his current class.

Today, Tyrell says that most of the weavers he knows are part of the LGBTQ+ community like himself. He doesn’t know any straight male weavers and hardly any cis women who weave either.

Queer folks are once again saving, transforming, and molding traditions to fit the times, although it’s never an easy route. 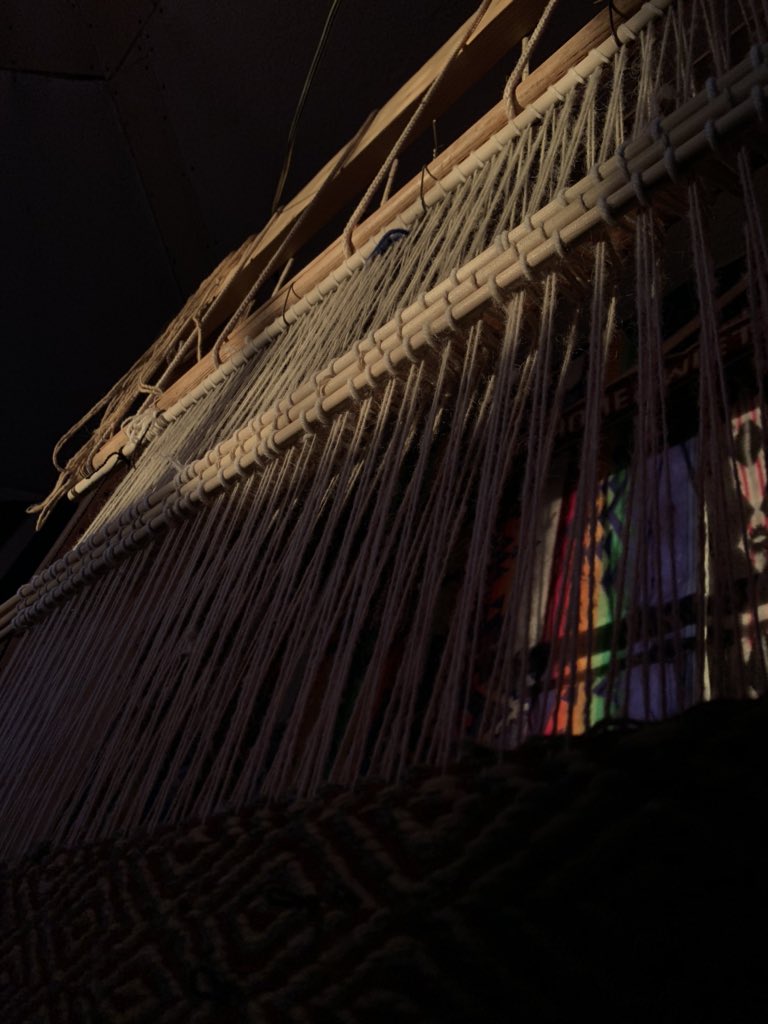 Picture shows a traditional room from a corner angle through a loom, with the sun peaking over a dark room and a rainbow flag in the background; courtesy of @navajotywoolboy

Tyrell says that this journey is what affords him his clothes and feeds his sheep, but to many— it’s so much more. It’s an art, it’s a craft, and it captures a part of history. 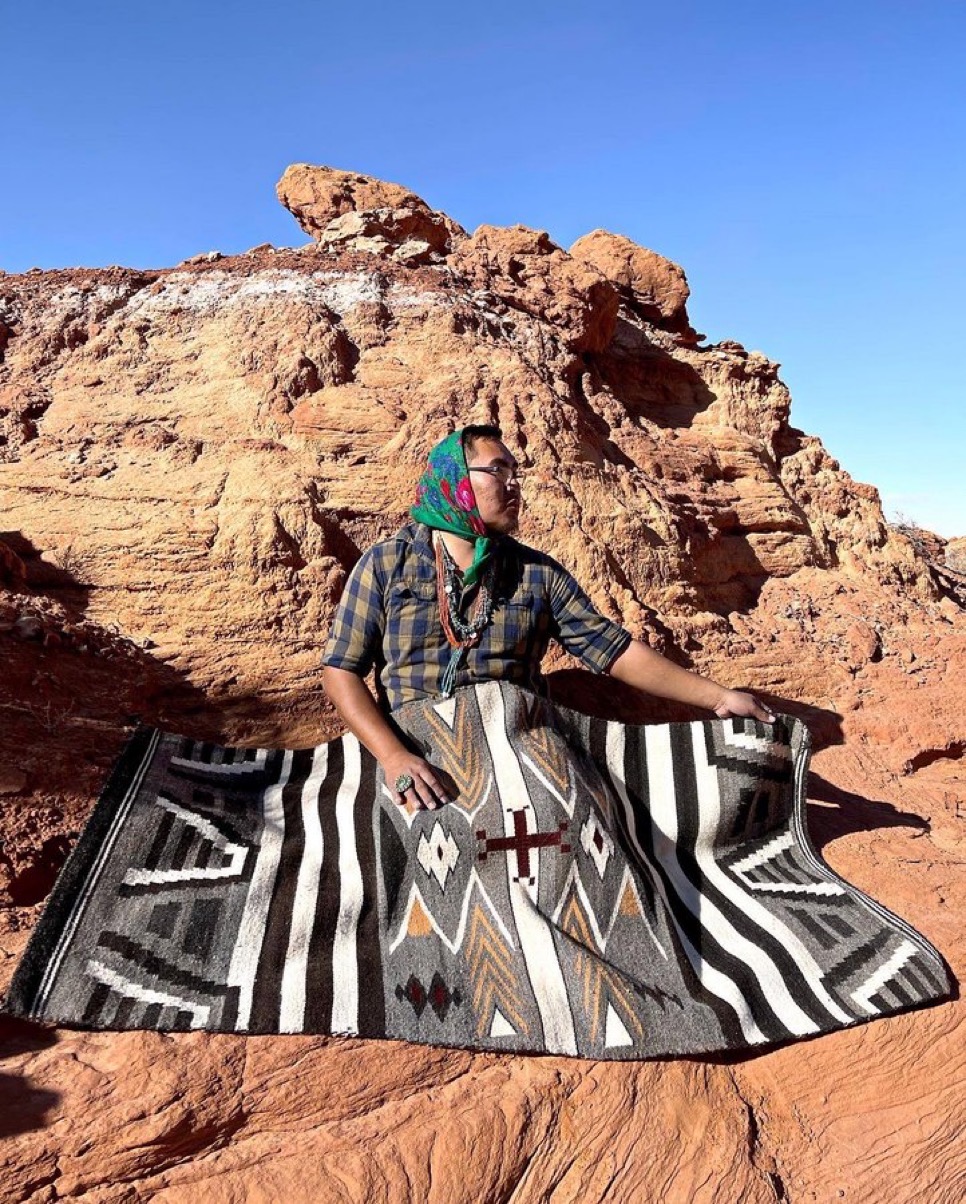 Picture shows Tyrell with a scarf wrapped around his head as he kneels down with his rug laying across his legs, displaying his work with canyon hills behind him; courtesy of @navajotywoolboy

Allen Salway is an Indigenous Cultural Curator and Writer from the Navajo Nation.