Stop Fashion-Related Deforestation in the Amazon

This is a
climate
emergency

If you’re wearing leather shoes, a leather belt or carrying a leather handbag, it’s highly likely that it was made from cowhide that contributed to the destruction of the Amazon rainforest.

The Amazon rainforest is fast approaching the tipping point of irreversible ecosystem collapse, according to scientists. We’re calling on the world’s leading fashion brands to act immediately to protect the Amazon rainforest, its people, and our global climate future.

The Brazilian cattle industry is the main driver of deforestation in the Amazon Rainforest. The industry is driven by demand for beef and leather. Brazilian leather is used by tanneries and manufacturers around the world to make countless branded consumer-facing products including footwear and high-end fashion products.

A study published in Nature warned for the first time that the Amazon has become a net carbon emitter––now releasing 1 billion more tons of carbon dioxide than it absorbs. This catastrophic development is the direct result of bad government policy and irresponsible corporate practice, and it threatens life on earth as we know it.

The good news: Tropical deforestation is not necessary for livestock production nor essential for rural economic development. We already have plenty of models for effective rainforest conservation –– Indigenous land tenure, community forest management, regenerative forest enterprise development –– including from Brazil, which made great strides in reducing deforestation between 2005 - 2015.

Over a hundred of your favorite clothing and apparel brands. Although none of these brands are deliberately choosing deforestation leather, they are working with manufacturers and tanneries that source from opaque supply chains and companies that have known links to cattle raised on recently deforested Amazon land.

The more supply chain links, the greater the chance that any individual product came from deforested Amazon rainforest land.

Over 100 fashion brands have ties to deforestation 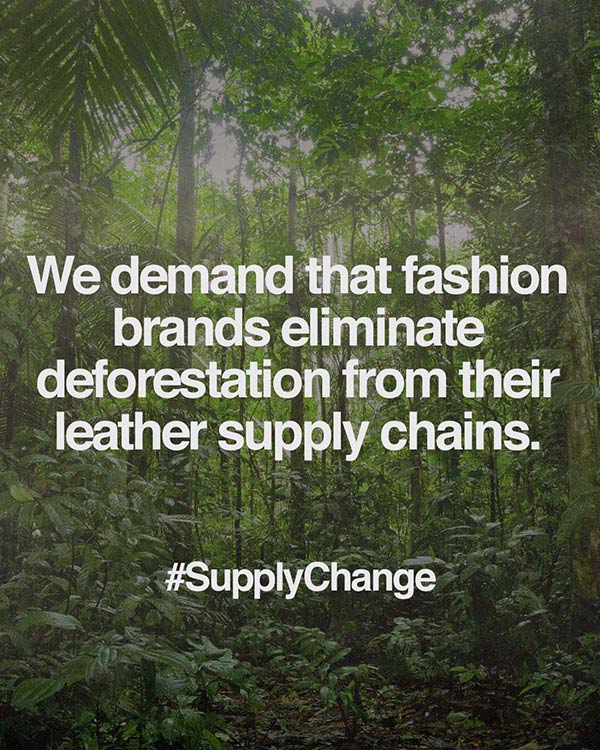 I demand that fashion brands and manufacturers eliminate deforestation by fixing systemic flaws in their supply chains. Fashion brands who can’t prove traceability back to the birth of the cattle may be using leather that is directly contributing to Amazon deforestation

Actions Your Company Can Take

Bovine leather is a USD $1.1B industry for Brazil. Since Brazil exports 80% of the cowhides it produces, fashion companies around the world are in a unique position to disrupt this destructive supply chain by:

We, the signatory companies representing businesses across apparel, fashion and other products made with leather, urge national and international governing bodies to pass and enforce robust legislation requiring companies to conduct due diligence to identify and eliminate deforestation and human rights abuses from leather supply chains.

Scientists have warned that the Amazon rainforest is on the verge of an irreversible ecosystem collapse. This ecosystem destruction is a form of genocidal violence against the Amazon’s Indigenous peoples, local communities, and environmental defenders, while feeding corruption, organized crime, and lawlessness. If it continues, the loss of the Amazon’s enormous capacity to store carbon and generate rain could lead to catastrophic climate consequences for the entire world––in addition to devastating biodiversity loss and increased risk of zoonotic disease pandemics.

In the Brazilian Amazon, evidence suggests that nearly all deforestation is illegal. Yet commodities produced on illegally converted lands continue to find unwitting consumers in the United States, Europe and other major markets. Beef and soy production are well-known drivers of Amazon deforestation. Leather, though lesser-known, is also a major contributor to Brazil’s massive cattle sector.

In 2020, leather accounted for $1.1 billion USD of Brazilian slaughterhouse's revenue––with 80% of it going to export. Since fashion companies use about 70% of the world’s leather––, we have a tremendous responsibility––and opportunity––to contribute directly to the solutions and help bring an end to deforestation.

The good news: tropical deforestation is neither necessary for livestock production nor essential for rural economic development. Furthermore, the world already has plenty of models for effective rainforest conservation––including Brazil itself, which made great strides in reducing deforestation between 2005 - 2015 through increased monitoring, enforcement, and cooperation between governments and civil society.

Unfortunately, in recent years, these gains have been reversed and deforestation has been on the rise. It has become painfully clear that voluntary corporate initiatives alone aren't sufficient to protect one of Earth’s most precious biomes. Government leadership and regulatory frameworks are essential for the kind of systemic change required to stop the destruction of the Amazon.

Therefore, we have come together to express our vigorous support for efforts by lawmakers in the United States, European Union, and United Kingdom to develop regulatory frameworks to reduce deforestation driven by the international trade in agricultural commodities. We urge lawmakers in these jurisdictions to pass the following legislation, or develop specific regulations in regards to approved legislation, as quickly as possible, ensuring the inclusion of cattle products and leather as regulated commodities.

The passage, regulation and robust enforcement of these measures will expedite the global transition to responsibly sourced forest-derived commodities and facilitate accountability and trust from all stakeholders.

We urge lawmakers in the US, EU, and UK to include the following considerations in these efforts:

We look forward to working with legislators in both continents to advance these measures as part of a broader policy and regulatory agenda to curb all natural ecosystem loss and degradation. We must do our part to safeguard these essential ecosystems for the sake of our climate, our health, and the future of our planet.

How do you know if a particular leather product contributed to Amazon deforestation?

There is no traceability system in place to track the journey of an individual cowhide from ranch to slaughterhouse to tannery to end product. This means it’s not possible to ascertain whether the leather in particular handbag or shoe actually came from the Amazon, even if the brand purchases leather from a supplier that sources leather from a Brazilian tanneries known to engage in deforestation.

However, this research exposes how large volumes of cowhide from the Amazon infiltrates the entire leather supply chain, implicating nearly all companies that use leather. Even if the leather in one particular pair of shoes didn’t come from cowhide from the Amazon, the sourcing relationship means that all of the brands that appear in the research are engaging in business relationships that support deforestation.

Another way to put it: Any leather product made by any of the brands that appear in this supply-chain research carries a significant risk of being “tainted” with deforestation.

Why are you singling out Brazil?

While cattle-related deforestation is a problem in other Amazon countries, this campaign focuses on Brazil because of its outsized role in the global export market for leather. Brazil generates USD $1.1 billion in revenue from leather, with 80% of its volume going to export.

Brazil holds the majority of the Amazon rainforest within its borders––as well as the largest cattle herd in the world (215 million animals, according to the Rainforest Foundation Norway). Between 2001 - 2015, 45% of the total area of forestland lost to the cattle industry worldwide occurred in Brazil (21.8 million hectares). Evidence suggests that most deforestation in Brazil is conducted illegally, according to the MapBiomas, Annual Report of Deforestation in Brazil 2020.

Isn’t leather a positive use of a cattle byproduct that would otherwise go to waste?

Given how much export revenue Brazil generates from leather production, cowhides are considered a co-product, rather than a byproduct, of beef. While the vast majority of Brazil’s beef is consumed domestically, most of its leather makes its way into shoes, handbags, belts, and other items used daily by consumers around the world.

Because of this, leather adds a lucrative financial incentive for Brazil’s major tanneries to look the other way when it comes to purchasing cattle from questionable slaughterhouses. Put another way, leather is a valuable commodity that drives deforestation, just like beef.

What about brands that source “responsible” leather? For example leather from tanneries with a gold rating from the Leather Working Group?

Being a member of the Leather Working Group, even a gold-rated one, does not guarantee the leather is deforestation-free. The LWG only traces leather from tanneries back to slaughterhouses, not back to farms––nor does it provide any information on whether or not the slaughterhouse is linked to deforestation. The Brazilian leather producer JBS claims that it traces cattle back to the farm itself; However, cattle usually pass through multiple farms before slaughter. According to 2021 data compiled by Mighty Earth: “Much of the deforestation included in the meatpackers’ scores is related to their indirect suppliers, which meatpackers currently cannot fully trace and therefore cannot monitor for deforestation.”

In other words, the leather supply chain is implicated in a larger cattle laundering system, whereby the farms earlier in the cattle’s life cycle are the ones engaging in deforestation but those that the slaughterhouses purchase from may appear “clean.”

JBS itself is a gold rated LWG member, yet multiple research reports cited in the Stand.Earth research provide evidence that its cowhides come from recently deforested areas of the Amazon.

Despite the proliferation of “responsible leather” standards and brand policies, both the volume of cowhide Brazil exports and the deforestation rate are on the rise. This demonstrates that the solutions and enforcement mechanisms developed by corporate entities are clearly ineffective.

What about economic development for people in poor rural areas of Brazil? Doesn’t the leather industry provide much-needed jobs?

The good news is that research shows tropical deforestation is neither necessary for livestock production nor essential for rural economic development. Furthermore, the world already has plenty of models for sustainable rural economic development that are not just compatible with rainforest conservation but actually foster good conservation outcomes––including in Brazil. In fact, from 2005 - 2015, Brazil reduced deforestation significantly through increased monitoring and enforcement and cooperation between governments and civil society, making it a global success story.

Why are you calling for legislation instead of an industry-wide switch to vegan leather?

Robust legislation––as well as adequate budget for enforcement––that requires full traceability throughout the entire lifespan of the cattle is essential to stopping the destruction. The current legal and policy landscape, as well as assurance systems, trace cattle only back to the slaughterhouse, not from the birth farm. This is a big part of the problem, since most deforestation occurs on farms where the cattle spend the earlier part of their lives––a fact that is obscured when cattle changes hands multiple times before reaching slaughter.

Yet an industry-wide switch to vegan leather, at this stage, is also not a solution. Most vegan leather (also known as “pleather”) is made from plastic, which is a fossil-fuel product. Synthetic leather does not biodegrade and leaches chemicals into the environment––and its production feeds the fossil-fuel industry, which is currently investing billions into new plastic production facilities.

The real solution is a combination of responsibly produced leather at much smaller volumes and investment in biodegradable and natural leather alternatives. This is a burgeoning area of innovation that fashion companies can and should support.